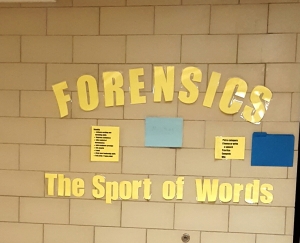 Words on the wall know the score.

I had the opportunity recently to judge a high school forensics meet. No, there are no bodies, no ballistics to study or fibers to test. As a matter of fact, it’s about as far as you can get from a police procedural drama as you can get. In this case, forensics is a speech competition where students participate in different categories like interpretation, extemporaneous, and my favorite category, informative.

That’s right, I competed in high school and in college. I loved it, in a masochistic kind of way. You stand up in front of six or eight students and a judge who listened to your speech/performance and rank you against the other people in the round. Considering most people are not fans of public speaking, doing it for fun and competition makes you a special kind of strange. Or at least a special kind of attention seeker.

It was really exciting for me to be back at a meet as a judge (I judged a bit while I was in college too), and I was surprised at just how familiar it all was. It’s been….let’s leave it at a while, shall we…since I was competing, or judging for that matter. But the nervous energy when you walk into the room is the same (whether you’re a competitor or judge). The pieces were different – we would have had points taken off for four-letter words when I competed, but the feeling was the same.

I didn’t realize how much I missed it. Okay, I encouraged my daughter to join her HS team this year, and I helped her work on her piece, but I didn’t realize how much I missed being part of the competitions. Was it nostalgia? Probably. But it was also the love of performing, competing, watching your fellow competitors get better and better (and maybe hoping  just a little that they would get a case of brain freeze), and the feeling of being in a cafeteria or auditorium in a school somewhere filled with people just as excited and nervous as you.

The good news is that I’ve been asked back to judge another competition – I’m not saying when or where to try to keep things fair. But I’m really looking forward to it.